Living here, we’re not desperate to get away for a holiday

School is back and all of a sudden, it’s stifling hot – it must be the end of January. I’ve had a very chilled-out month, enjoying the school holidays and opportunity to forgo my usual routines.

After Christmas, we welcomed two new members to our family: Lenny (he’s black and white) and Holly (she’s the tabby). We’re enjoying getting to know them and watching them get up to all sorts of mischief. It’s like having a toddler in the house again.

The summer holidays were one epic staycation. We took advantage of the beach being only a stroll away. The wee guy went on a little holiday of this own to my parent’s farm. Mr More Time and I had three nights at home by ourselves. It was quite a shock to the system.

The only big “it’s easier without the wee guy” task we embarked on was clothes shopping. It confirmed that wandering around the shops is not a pastime I miss, not that I was ever a great shopper.

When I decluttered my wardrobe, I noticed that I’m a panic buyer when it comes to clothes. I have a tendency to buy the best of a bad bunch, just to get it over with. On our shopping trip, I was looking to replace a couple of items, but nothing passed the “looks awesome, you’ll wear this for years to come” test I now apply. Rather than a failed trip, I saw it as a victory for not creating future clutter.

Reading: I love the serendipity of the library reserves queue. It saw me start the year with three cracking memoirs from three amazing ladies. Becoming by Michelle Obama, Year of Yes by Shonda Rhimes, and Meet the Frugalwoods by Elizabeth Willard Thames. 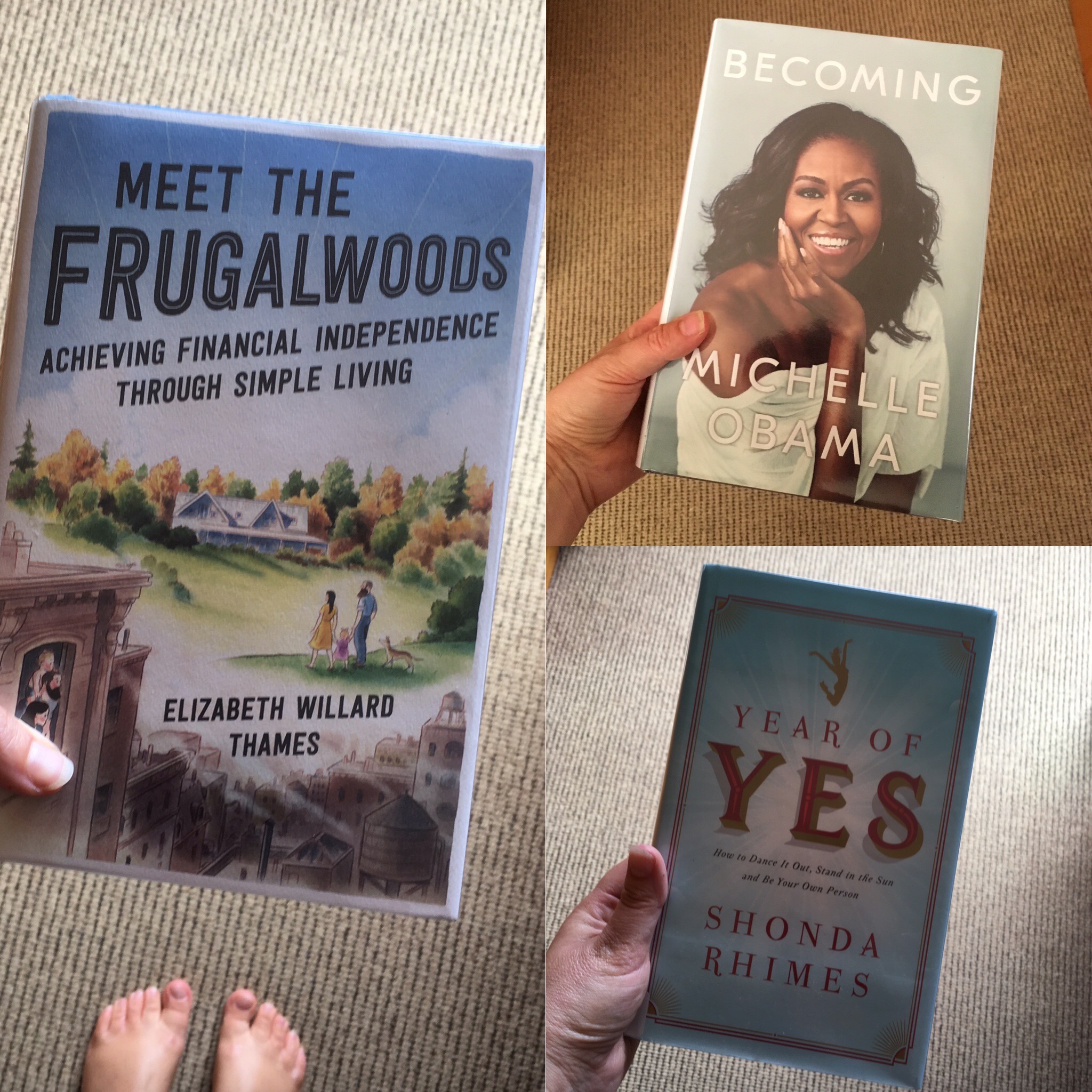 All these books arrived for me at the library at the same time. Plenty of inspiration in this lot.

They all tell stories of people who were conventionally successful, but unhappy. Each pivoted their life, defined success on their own terms and went for it. I highly recommend them all, but Meet the Frugalwoods is a must read for More Time Than Money readers. Liz tells the story of how she went from doing everything right, but feeling stuck on a hamster wheel, to adopting a much simpler way of living that enabled to her to discover and then live out her dreams.

Listening to: I’ve recently discovered the People Fixing the World podcast from the BBC World Service. Like it sounds, it’s about people doing cool things to try and make the world a better place.

I also really enjoyed listening to an interview with Russ Harris about happiness and values on The Art of Charm.

Making: My little veggie patch is at peak production. I grew my first cucumber, had a bumper crop of cherry tomatoes and just harvested my first artichoke (which I have no idea how to cook). Tips anyone?

January is such an exciting time in the garden

Thinking about: My guiding word for the year is “enough”. Mostly, I use it to guide me away from taking on too much and to get greater satisfaction from what I achieve. However, there are areas of my life where, hand on my heart, I don’t feel I’m doing enough.

One such area is lessening my impact on the environment. I have struggled with this for a very long time, since my early teens. It’s overwhelming to think of the scale of action needed to turn the ship around. Previously, doing more hasn’t helped me feel any better about things. No individual action is ever going to be enough to save the planet, so I always felt defeated, not matter what I did.

I want to do more, but I’m scared of overwhelming myself. Then it dawned on me, this is the perfect candidate for an enough list. So, I’m going to brainstorm a list of new environmental actions that I can adopt, one at a time, month-by-month over the year. Watch this space!

What were your highlights for January? Let me know if you’re keen to join me in adopting some new pro-environmental actions.

Errands and admin made simple

How to simplify getting dinner on the table

This is what buffer looks like … and how it feel

Yesterday we had an epic family adventure on Kapit

A reminder in the midst of all the New Year, New Y

I don’t pretend that picking up rubbish on my wa

Confession: I’m a fan of Eat Well for Less. Any

Last day of Term 2 today Halfway through the schoo